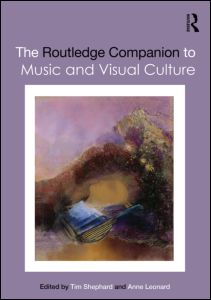 The Routledge Companion to Music and Visual Culture

Video art is often considered a visual genre. But the electromagnetic basis of the video format enabled sound and image to be recorded and projected simultaneously in an easy, portable way. As a result, the medium could produce a live form of audiovisual synergy rarely possible before. As earlier chapters in this volume point out, attempts to capture temporal elements in the static arts proliferated as the twentieth century progressed, with movement and transient fluidity becoming prominent themes for many Impressionists, Cubists, and those involved with Orphism, Vorticism, and Synchronism. And yet Karin von Maur has argued that in many cases, the governing force was not simply time but, rather, musicalized time: “Never before in the numerous programs and manifestos of the avant-garde did there appear so many temporal concepts, such as rhythm, dynamics, speed, and simultaneity, or musical terms such as cadence, dissonance, polyphony, etc., proving the existence of a close link between the temporalization tendencies in art and the reception of musical phenomena.” 1 Film technology provided a significant boost to the possibility of “musicalized time” as it enabled the static image to burst into life, a leap into temporalization that manifested itself most clearly in the early visual-music films of Oskar Fischinger and Hans Richter and the mid-century experimentation of Californian visual-music artists Jordan Belson, James Whitney, Hy Hirsh, and Harry Smith. Although film equipment allowed images to become temporally and aurally active, the arrival of the video medium onto the commercial market in 1965 encouraged a form of live, interactive audiovisuality able to significantly expand audiovisual, cinematic space. Video was cheap and easy to use: it could be managed by one person; it could manipulate sound and image in real time; it could use the space around it as a creative material; and it could engender a new mode of activated spectatorship.