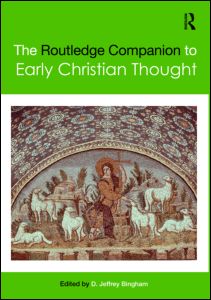 For a century and a half at least, it has generally been assumed, by its defenders and by its detractors alike, that ecclesiastical thought in the age that separates Paul from Constantine was not a mere blossoming of the primitive gospel but a kind of oleaster, the result of a studious grafting of mundane philosophies on to the biblical stem. There are those who maintain that it had to be so, that God could not have spoken to every people through the words of Christ had he not prepared them already by communicating truth to them in their own idiom; others protest that Paul denounces the wisdom of this work, that Christ was avowedly the bearer of a new commandment, that his advent was anticipated only in the preaching of the Hebrew prophets, and even they were misunderstood by those who had only nature’s ears to hear them. On either view, philosophy is an importation into Christian teaching, and, because it is widely held that the philosopher in the Roman world was not a man who thought for himself but the mouthpiece of a dead master, it has been natural to assume that the Christian too would not devise his own philosophy, but would attach himself to the creed already promulgated by an established school. Thus an author will be classified as a Platonist or a Stoic if he airs a doctrine that reminds the modern critic of those sects, and all the more so if his own citations lead us to his source. The author adduced most frequently, and with the least reproach, in Christian texts is Plato; Platonism, therefore, is supposed to have been the dominant philosophy of the church fathers, and the reason for this is commonly said to be not so much that they chose to make it so as that its influence in the world from which they received their education was irresistible. The adoption of philosophy, then, is presented at best as a wise passivity to circumstance, which cajoled the intelligence and dispelled the enmity of pagans, while enabling the Christian neophyte to eke out the teachings of the infant church with answers to questions that the apostles and Jesus never thought to ask.