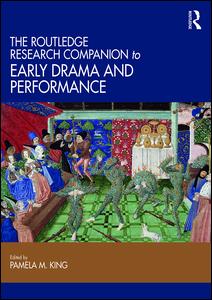 The historiography of reception 1

The Routledge Research Companion to Early Drama and performance

The performances of early drama have come and gone. The sights, sounds, smells and other sensory experiences of each particular audience cannot be recreated. Studying early theatre, in particular the plays performed before the rise of print culture and the professional playhouse, is therefore the study of oblique witnesses to a long gone ephemeral event – unique even when repetition of an earlier event was intended – that took place in real time. These witnesses form the enduring substance that surrounds the essential void that is the thing itself. As the other chapters in this volume demonstrate, those witnesses, and the fruitful scholarship they engender, are various, including eyewitness accounts, itemised accounts of the other kinds recording the expenditure and income relating to the performance, as well as regulatory materials in which various authorities asserted control over what was performed. In the case of drama, that is performance which included spoken text, the script of what characters should or did speak has traditionally been privileged to the point at which it has tended to be discussed synonymously with “the play”. There is, of course, a now well-established caution in scholarship that makes scrupulous distinction between the text and the play itself, and yet proficient editions still lead students to accept unquestioningly that texts of very dubious provenance represent what was played in this or that place for 150 years or more. The present chapter will explore the status of a number of our surviving texts of medieval plays, concentrating on the English biblical tradition, 2 interlaced with a consideration of their reception in the intervening centuries from the earliest antiquarian collectors to modern critical scholarship, and with the merest nod towards theatrical adaptation and production. The chapter thus aims to introduce the idea that throughout their history these texts have been received in ways that are necessarily understood within the grand narratives current at the time, with the implicit caveat that our own time is no exception. What set out to be a survey of codicological and antiquarian research, and the opportunities that remain within the field, becomes rather an exploration into the historiography of early drama studies, or how generations of blind men – and women – have felt, and understood, the elephant.

The Medieval and the Avant ...

Dance and Gesture as Media ...

Arras, where Burghers and J...