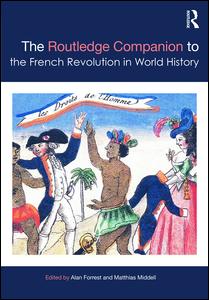 The Routledge Companion to the French Revolution in World History

Revolutions are always violent: it is in their nature to resort to violence and bloodshed, which, though brutal and cruel, and causing pain to many innocent people, is recognized by revolutionaries as the kind of sacrifice that human beings must accept if they are to construct a better world. Indeed, revolutionaries never deny that their revolutions will require a degree of force. Mao Zedong (???), for instance, once put it very plainly:

A revolution is not a dinner party, or writing an essay, or painting a picture, or doing embroidery; it cannot be so refined, so leisurely and gentle, so temperate, kind, courteous, restrained and magnanimous. A revolution is an insurrection, an act of violence by which one class overthrows another.1

The idea that ‘violence is the intrinsic attribute of revolutions’, laid out here by the founder of the People’s Republic of China (PRC), ranks among the classical concepts of revolution, and is, in my view, indisputable. But history tells us that revolutions in different countries, although generally violent, varied greatly in the degree of violence they deployed. For example, the French Revolution was much more violent than the English or American ones. Indeed, in its ferocity it was unprecedented in world history, and this defined its character and its global influence much more strongly than it did the Anglo-Saxon revolutions which were in many ways just as significant for the emergence of the modern world.
Cite

The Republic and the Muslim...