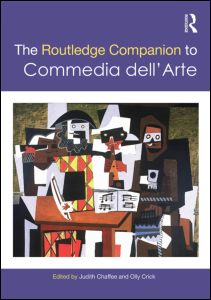 The Routledge Companion to Commedia dell’Arte

The rise and fall and rise again of Commedia dell’Arte is unparalleled in the annals of theatre history. Originating in the sixteenth century as a popular Italian theatre form in which actors created stock characters, some in half-masks, who improvised dialogue from plot scenarios, Commedia flourished throughout Europe into the eighteenth century. But, due in part to a reputation for debauchery and scatological humour, and by popular comedic performances of less than professional skill and intent, it was relegated to insignificance by theatre artists interested in “serious art”. Since the beginning of the twentieth century, however, there has been a resurgence of Commedia dell’Arte. A great many historical, technical, comparative, and philosophical books have been published about Commedia, and many performances using physical theatre and masks claim to be twentieth or twenty-first century versions of the Commedia style. Publications and pronouncements are prolific but are scattered over a wide range of disciplines, from theatre to opera, ballet, and symphonies; from the historical to the sociological and cultural; as well as from techniques of performance, both traditional and modern. Some of the existing histories of the genre are quite old, and hence unavailable to a general reader. Some of the significant modern papers are available only in limited-edition academic papers or in unpublished doctoral theses. Within this volume you will find an overview of this genre, focusing on key aspects and developments, from its defining features and historical roots to contemporary incarnations, giving space to these new researches and theories. These articles are written by academics, practitioners, and enthusiasts, eminently qualified to synthesize both old and new research as well as performance practices. It is not intended to present a correct one-sided view, but rather confront aspects of the genre that define it as a unique and entrancing form of theatre.

Commedia dell’Arte and the ...

Dario Fo and the Commedia d...

Bibliography of Generally A...