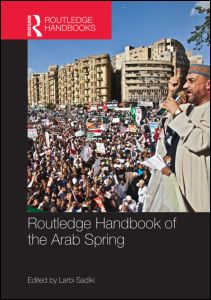 Routledge Handbook of the Arab Spring

Women’s presence in group struggles, revolutionary crowds and anti-colonial wars across the Middle East and North Africa has long shaped the historical development of the region. The importance of women in social change was recognized with the awarding of the 2011 Nobel Peace Prize to Yemeni Arab Spring activist Tawakkol Karman. This chapter focuses on the participation of women in the Tunisian revolution as a rare moment of gender equality in which women’s rights were secondary to the primordial concern for collective equality and freedom for all citizens. The gender politics of the former regime, its brand of ‘state feminism’, was not the sole target of popular opposition to the government. The way in which the state had historically ‘gendered’ its brand of secular modernism, an ideology that was used to gain and maintain power, was deconstructed in the gender-neutral crowds and subsequently came under scrutiny in the wake of the revolution. If the revolution aimed to ensure equality, justice and dignity for all Tunisians, including women, the post-revolutionary period began a transition process where national reconsolidation effectively reconsidered how the regime had ‘gendered’ society and politics. Valentine Moghadam’s assertions about the gendered character of political and social change in the region could be noted here:

Change in women’s social positions has come about through a combination of long-term macrolevel processes-notably industrialization, urbanization, proletarianization, the demographic transition, globalization- and forms of collective actions that include national liberation movements, revolutions, and social movements. At the same time, such processes have been gendered, in that men and women have different roles, experiences, and outcomes, while concepts of masculinity and femininity have infused a range of political processes and policies.

(Moghadam 2013: 1) Broadly speaking, social change has affected women’s rights in Tunisia in ways that have been largely beneficial to Tunisian women, and the 2011 revolution is a continuation of that long-term process. However, the revolution ushered in a period of intense political competition between secular and Islamist social projects where debates about gender were central, and this new political field rife with debates about gender has at times come great at peril to women in new forms of exploitation ranging from political exclusion, discursive violence and physical violence against women. The post-revolution period restored the Third World nationalist discourse of the new nation being ushered in by women (Shohat 1997). Yet, it also repeated the failures of Third World nationalist ideals that suture together gender, religious and national liberation. In this chapter, I address the uncanny and restorative gendering of the post-revolutionary transitional governments, electoral activism and party politics.
Cite

Palestine and the Wind of A...

Failure of a Revolution

The Uprising in Bahrain