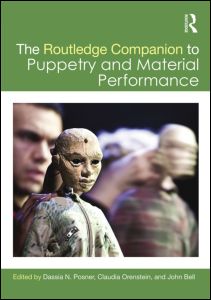 The Routledge Companion to Puppetry and Material Performance

Korean traditional rod puppetry (kkokdu gaksi noreum), 1 which was almost defunct at the time of the Korean War (1950–1953), experienced a revival starting in the 1960s. This renewed interest in the art came with the rise of nationalism by way of post-colonial academic work in folklore, which hoped to reconstruct indigenous “roots.” Contemporary artists have, since the 1980s, sought strategies to fit kkokdu gaksi into modern performance. But the bawdy folk genre called namsadang nori, a type of performance that amalgamates farmer’s band (nongak) music, circus feats, acrobatics, mask performance, and the traditional puppet play of kkokdu gaksi, may remain an uneasy match for what the market currently desires in traditional forms: to be able to export a national “high” art in cultural exchanges, to activate child-specific entertainment of modern mediated puppetry, or to energize the urban middle class with a sense of roots in a period of economic growth and democratic freedom. These Korean folk genres, which were low class and critical of the hierarchy in their comic energy, have great potential in times of political urgency and were used evocatively by student protesters in the 1980s to oppose the military dictatorship of President Park Chung-hee and to attack the American military presence (Park 2013). However, they do not approximate elite “art” aesthetics of court or contemporary urban elites. This means that the modern puppeteer must make choices, when purely following the tradition will be seen as too messy, bawdy, or boring. One strategy is to wed selected portions of traditional forms to other arts with which it has no historical link; another is to mold tradition into an avant-garde display where visual aspects may be expanded and recast, becoming more impressive than the original, which was a joke-driven form. Only one government-supported heritage troupe of namsadang nori is currently performing the traditional show on a limited basis. But here, after some discussion of the history, we can see how the work of two groups in particular, Hyundai Puppet Theatre and Creative Group NONI, has reworked aspects of Korean traditional puppetry.

Return to the Mound